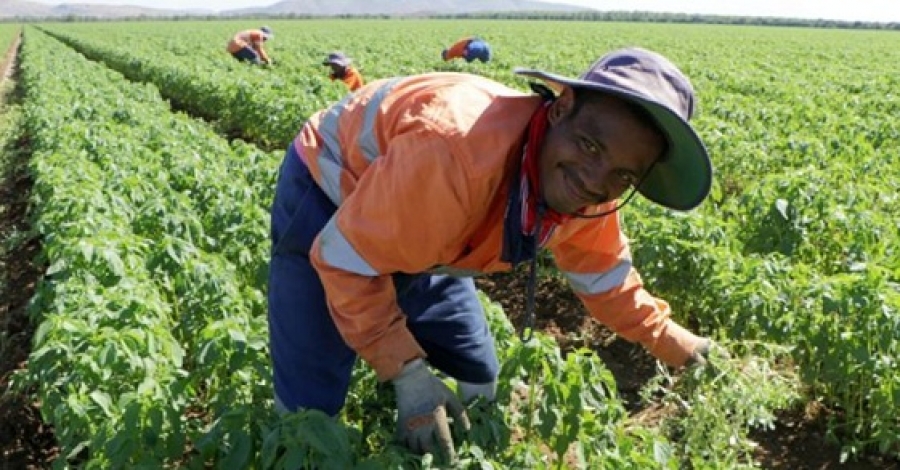 Timorese workers in a chia paddock in Kununurra, Australia. Source: The ABC

"If you want to come back [to Australia], you have to leave the (labour) union." This was the stark warning a fruit picker taking part in the Australian government’s Seasonal Workers Program told Fairfax Media he was given.

"I want to come back. I was scared of his words. So were others and some people resigned from the union that day."

The Australian government's Seasonal Workers Program is meant to be win-win, benefiting both under-employed fruit pickers from Timor-Leste and Pacific nations and Australian farmers, who struggle to find local seasonal labour to ensure fruit isn't left to rot on the vine.

It's also meant to be Australia's most exploitation-proof migrant worker scheme.

But about a month after workers from Vanuatu began their work, they noticed a series of "deductions" were included on their pay slips. Accommodation, transport, airfares and a bond were being taken out. They started querying their rights.

"I was working five days a week, Monday to Friday, 38 hours, and my pay slip was around $800 a week. But with deductions, I am left with $500", one worker told Fairfax Media.

"We decided to join the union."

That decision, and the allegedly unlawful response of the labour-hire agency that employs the workers, has led to an Australian Federal Court application that once again raises questions about the integrity of the supply chains in Australia's horticulture sector. It repeats an increasingly common story in Australia – migrant workers in poorly paid, low-skill sectors are being mistreated.

Affidavits signed by several of the workers on the seasonal workers program allege that labour hire firm MADEC, Australia's largest user of the Seasonal Workers Program, had pressured workers to quit the National Union of Workers. If they did not, they would be denied future employment, and workers from Vanuatu would not be recruited via the Seasonal Workers Program.

MADEC even distributed a pro-forma resignation form to 145 workers that they were to fill in and hand to the union. This is a clear breach of Australian laws that protect freedom of association. Threats to join or quit a union, while sometimes made by employers or unions, rarely involve such brazen activity as the distribution of a resignation form accompanied with threats.

Perfection Fresh declined to comment when contacted by Fairfax Media. MADEC's Chief Executive Laurence Burt told Fairfax Media that a "misunderstanding" had led to the distribution of the union resignation forms and that the company had taken urgent steps to assure its migrant workers they could join a union and exercise workplace rights.

"We are proud of our record in exposing bad practices in the industry," said Mr Burt of the not-for-profit labour hire firm that has recruited 3000 overseas workers for farmers, including 570 via the SWP in the last financial year.

Other major farming companies in NSW and Victoria have also been exposed, leading to raids by immigration and Fair Work Ombudsman authorities  and prompting the National Farmers Federation and major supermarkets, Coles, Woolworths and Aldi, to detail their efforts to scrutinise supply chains.

Woolworths said on Friday in a statement that its supplier contracts required farmers to treat workers fairly and lawfully and Aldi has previously released similar statements. A Coles spokesman said the company "takes ethical sourcing very seriously and has a pro-active approach to labour standard issues, working closely with our suppliers, key NGOs and stakeholder groups." It worked with authorities to "review and address" claims of unfair treatment at suppliers.

The controversy comes as the Timor-Leste government program had proven to be “a great success’ in a statement released January 30 2017.

In 2016 there was in increase of 67.4 per cent in the number of Timorese workers travelling to Australia to take part in the program, with 298 workers involved – many for their time.

Timor-Leste’s Ambassador to Australia, H.E. Abel Guterres, said “the program is a ‘win, win’ providing reliable and enthusiastic workers for Australian employers and an opportunity for the Timorese workers to develop skills and earn remittances to assist them and their families.”

A Memorandum of Understanding signed between the Timor-Leste and Australian governments in 2011 provides the basis for the program. Candidates must pass a physical fitness test and also demonstrate competency in using English. Placements are for a period of up to six months and are predominantly in the area of horticulture with farming businesses that produce grains, fruits and vegetables.