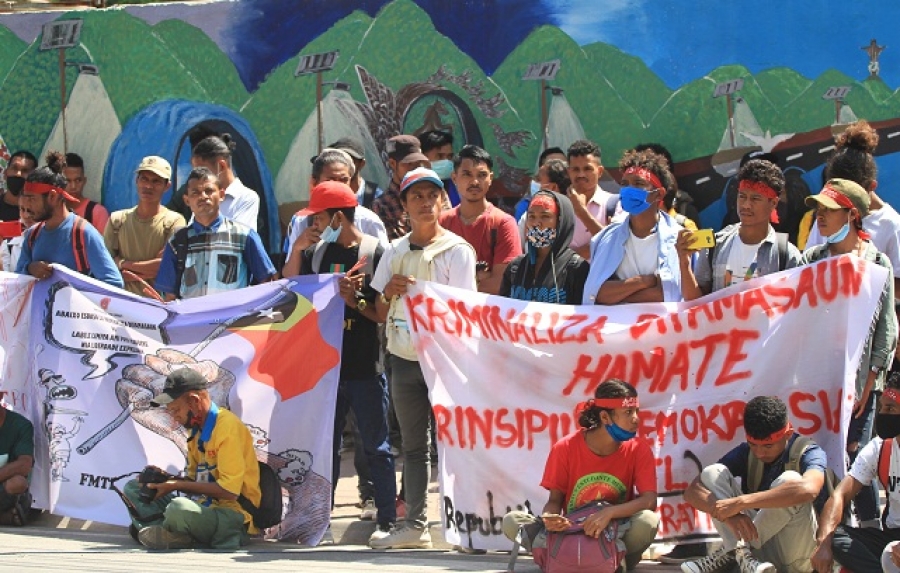 Protests over a proposed criminal defamation law spread to the University of Timor-Leste on Monday. Photo INDEPENDENTE.

DILI: Protests over a proposed criminal defamation law spread to the University of Timor-Leste on Monday as critics said the government was pushing an agenda that was in conflict with the country’s freedom of expression rights.

Students from the Movement of Timor-Leste (MUTL) joined members of the Association of Journalists of Timor-Leste (AJUTL) demanding that that proposal be scrapped, and the current Press Code regulating media-comment be respected.

On June 5, Manuel Carceres, the Minister of Justice said that the draft law, which he plans to present to the Council of Ministers, will restore to the country's penal code the offence of criminal defamation that was removed when the government adopted a new Press Code in 2014.

According to the draft, any person who “imputes or asserts to another person a fact or utters an offensive opinion of his/her honour and prestige, or transmits that imputation/assertion or opinion to a third party” can be held liable for criminal defamation.

The penalty is one-year imprisonment or a fine, but violators face up to three years in prison if the plaintiff is a public official, or if the offensive statement is made through traditional or social media.

Any person who defames a company, a former government official, or a deceased individual also faces a penalty under the law.

The proposed law cites the widespread use of social media as one of the reasons for the amendment to the penal code.

Novelino dos Santos, a spokesperson for MUTL and AJTL, says the law will “kill freedom of expression in Timor-Leste.”

“We are protesting today because the draft defamation law should not be approved by National Parliament,” Novelino told reporters.

Novelino said students across Timor-Leste would continue to protest the law until it was rejected.