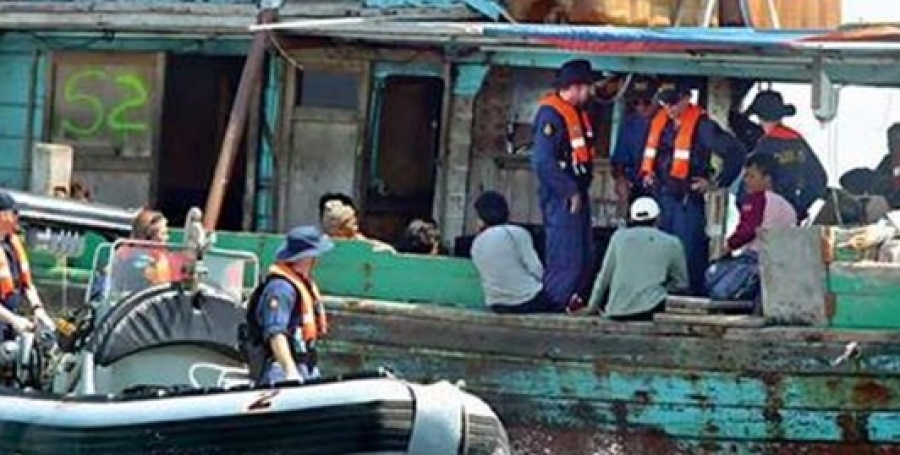 Hundreds of dead sharks are heaped together in a salt-stained pile below deck of the trawler as locals fishing inspectors carefully pick their way among the carcasses.

The catch is suspect – highly valuable, and most probably illegal

It's the latest example of a modern war on the high seas that is fast intruding into Timor-Leste and Australia's neighbourhood – the attempt to protect vulnerable fish stocks from the rampant demand of Asia's growing middle class and fishermen forced south by tensions in the South China Sea.

"It's not just the exotic stuff they're after," said Ian Storey, a security specialist at the ISEAS YusofIshak Institute in Singapore. "It's pretty much anything that swims in the ocean."

Already, 12 foreign ships have been caught fishing illegally since the middle of last year In Australia, with more expected to try as weather conditions improve.

Another 20 foreign ships were caught in 2015, compared to only six in 2014, according to figures provided by the Australian Fisheries Management Authority.

"Illegal fishing in the South China Sea is a major source of tension," DrStorey said. "As fish stocks are depleted, the big Chinese fishing fleets are moving further south".

Such movements were often urged by Chinese authorities in what amounted to "state-sponsored illegal fishing".

Chinese coastguard ships have regularly harassed fishing vessels from other nations, while the elaborate construction of artificial islands in the South China Sea has had a devastating environmental impact on already dwindling fish stocks in the region.

Indonesia has cracked down severely on illegal fishing in the past two years, making a show of burning foreign boats caught inside its waters.

But while Australia can afford sophisticated surveillance to police its territory, poorer nations appear most at risk.

Timor-Leste granted a fleet of 15 Chinese vessels a 12-month permit last November to fish inside its sovereign waters for a modest fee - just US$312,450.

The Chinese company running the boats, Pingtan Marine Enterprise has boasted previously that each of its vessels can generate annual revenue of approximately US$3 million.

Even allowing for fishermen who tell tall tales, profits of half that size would be extraordinary.

Pingtan was banned from Indonesian waters in 2015 and threatened with court action for alleged theft of fish.

After the Pingtan vessels were discovered a fortnight ago with a cargo hold stuffed with sharks, local feeling that Timor-Leste has been ripped off has quickly become a sore point.

Timor-Leste does not have a well-developed local fishing industry, with the Food and Agriculture Organization of the United Nations saying reliable data on local fishery resources are scant.

But the irony is not lost that China has made a show of befriending small nations such as Timor-Leste, even delivering a gift of a fleet of small patrol boats in 2010.

AcacioGuterres, Director General of Fisheries in Timor-Leste, told Fairfax Media local authorities carried out what he called a routine inspection of the Chinese fishing fleet over three days from February 9, aided by two Australian officials from AFMA.

It is understood the licence allowed each Chinese vessel to catch 100 tonnes of tuna in designated fishing grounds about 18 nautical miles from the Timorese coast.

But drone footage taken during the inspections revealed a large haul of sharks and rays, estimated at around 40 tonnes.

Sharks are nominally protected in Timorese waters but shark fin soup is a highly prized delicacy in Chinese restaurants.

Pingtan says on its website all its catch is shipped back to China. The company did not respond to requests for comment.

Fisheries expert Colin Simpfendorfer​ from James Cook University in Queensland said the value of the sharks seen in the drone footage was hard to ascertain, but with what appeared to be shovelnose rays present, the fins alone would be worth hundreds of dollars per kilogram.

Pintang Marine Enterprise, which is listed on the US NASDAQ stock exchange, has struggled since being banned from Indonesia.

MrGuterres said the permit had been issued to Honglong Fisheries, and his agency had sought and received a written assurance Pingtan was not involved after the company last year issued a press release to investors boasting of new fishing rights in Timorese waters.

In August, Zhou said the Timor-Leste deal - saying it was for 13 ships - would expand the company's harvesting regions, reducing dependency on a single territory, "as well as promote the economic development of Timor-Leste."

It is not only big commercial enterprises creeping south - although AFMA, via a spokeswoman, said there was no clear evidence of a trend towards larger boats replacing smaller boats to facilitate illegal fishing forays into Australian waters.

The Vietnamese boats are usually about 25 meters in length, roughly 100 tonnes in weight, made of wood, diesel powered and fishing with a dive compressor. Just over a decade ago, a far larger number of smaller Indonesian wooden boats were found in Australian waters before a government crackdown.

"Some people like to buy fish, but in these more developing countries, they'll just keep moving around looking for it," he said.