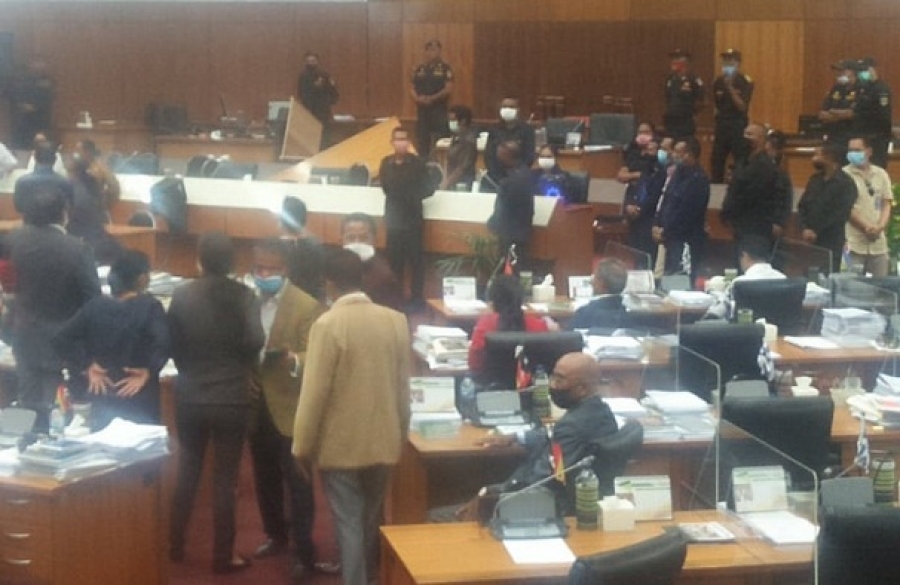 DILI: Timor-Leste’s parliament descended into chaos on Wednesday, with police called to intervene as some members reverted to throwing chairs and shouting in protest over a vote to oust National Parliament’s President, Arão Noé de Jesus Amaral.

Amaral, a member of the  National Congress for Timorese Reconstruction (CNRT), was dismissed in a landslide secret vote in which 40 of 65 members of parliament voted to replace him with Ancieto Guterres of the opposition Fretilin party.

The second day of turmoil in National Parliament, after the Vice President of the National Parliament, Maria Angelina Sarmento was physically removed by CNRT members from a plenary session after she tried to claim the president’s chair, underscores the political rift in the country, with no end in sight to more than 22 months of coalition government in-fighting.

The role of the president has been the subject of a hostile dispute across a number of rival parties.

The governing bloc of Fretilin, Khunto and People’s Liberation party had called for Amaral to be removed.

Last week the trio of parties drafted a letter, signed by a majority of parliament members, accusing him of “abuses of power”, according to Tatoli media.

However, CNRT and its parliamentary allies ferociously resisted the move.

CNRT, has been in a public standoff with the President of Republic, Francisco Lu Olo Guterres – a member of Fretilin- since the last federal election in 2018.

Originally over Guterres’s rejection of some of CNRT’s ministerial nominations and more recently his decision to decline support to CNRT’s efforts to take over the government.